Bree is 22. She is of a slim but muscular build, stands around 5’6", has long white-blonde hair that she typically keeps in a single braid, and indigo-blue eyes.

The first time that Cymbrean heard the word “Cleric,” she was 5 years old, and her mother lay dying. They rode into town, presumably having been called for aid against the unknown illness that had already claimed half of the small mountain village of Arden, and now looked as though it would claim her mother as well. Cymbrean had watched through tearful eyes as a Cleric of Ra had laid his hand on her mother, comatose for some two weeks now and barely breathing; light had poured from his hand like water, and her mother had opened her eyes and smiled, the picture of good health.
“How?” She had asked him. “How do I become what you are?”
“Pray,” he said simply. “Pray to Ra, and if you’re worthy, he’ll bestow his Blessing and awaken you as his Cleric.” That day, Cymbrean vowed to become a Cleric of Ra, no matter what it took.

She was the most devoted acolyte anyone had ever seen. For 10 years, she spent her every waking hour devoted to study, prayer, and the quest to make herself worthy of Ra’s Blessing. She worked in the temple, doing anything asked of her by Father Kelias, never faltering, never stepping a toe out of line. She lived and died by the Laws of Light as though they were the air she breathed.

On her 17th birthday, Cymbrean woke early for her morning prayer, as she always did. She’d barely opened her mouth to speak when she felt a tingling in her spine, like oil being poured over her shoulders; warm at first, then hot, then searing, as though white-hot knives were flaying her alive from the inside out. She screamed as she felt flesh rip away from bone, and clawed at her back with her fingers, desperately trying to find the source of the agony. She stopped dead as her hands found something new, something that hadn’t been there before, something made of bone and skin and…feathers. Scrambling to the mirror, she looked to see what her hands were clasping on to. Jutting from just above her shoulder blades was a set of bright white feathered wings; they gave off the faintest glow in the dim bedroom. The pain abruptly disappeared as she surveyed them in the mirror. She realized she felt them then as a part of her, as much as her arms or legs were a part of her. She knew them, the muscles and bones, as well as her own hands. Awestruck, she spread them out to get a good look, just as her mother and father burst into the room.

“Are you okay?! We heard you screa…”
Her mother broke off, her face going ghostly white, her expression one of horror. Her father’s own expression switched quickly from concern to rage, as he turned to her mother and spat at her feet before storming away.

3 days later, Cymbrean mounted a horse in the early hours before dawn.
Her wings were a glaring advertisement of her mother’s indiscretions, her father had said; he wouldn’t house another man’s daughter, she had 3 days to pack and go, no arguments. Korvosa, her mother had said through mumbled apologies; follow the Jeggare River to the West, Korvosa is a few days journey on horseback, she could receive her Blessing there as easily as here. She didn’t argue; she was old enough to look after herself, and if they didn’t want her, if keeping up appearances was more important than their daughter, then she had no interest in staying.

The first two days of the journey passed uneventfully, and she had just set up camp and knelt for prayer inside her tent on the second night, when she heard a man’s voice behind her.

“Stand and disrobe, child.”
She whipped around and immediately recognized the falcon-headed form of her beloved Ra, glowing white in all his glory. Her heart raced as his words struck home.
“Stand and…what?” She asked, confused, faltering.
He scowled disapprovingly at her.
“You pray for my Blessing all these years, and now when I come to you, you hesitate? Prove your worth and earn the Blessing, or deny me and leave here deemed forever unworthy.”
Cymbrean’s heart pounded in her chest; something felt wrong here. In all her studies, she’s never heard of anything like this to earn The Blessing. But this was her one chance, she couldn’t just throw it away; she had vowed to do whatever it takes. She let her robe fall to the floor. Smiling encouragingly, Ra gestured for her to lie on the makeshift bed, face down. Cymbrean obediently did as directed; squeezing her eyes shut, she braced herself for what would come next. A quiet wicked laugh whispered next to her ear.
CRACK.

Pain unlike anything she’d ever imagined tore through her and she screamed as Ra howled with laughter, holding her now mangled wing in his hand, dripping blood onto the floor. Then he started to shift; his Divine white glow turned fiery orange, the falcon head morphed to one of a wolf, then a man, then something reptilian. “Fool!” He cackled gleefully. “You think Ra would ever bother himself with a half-breed like you?”

Still grinning, he grabbed hold of her other wing and, with a bone-shattering crunch, tore it away. Still laughing, decimated wings in tow, he strode off into the night.

Cymbrean lay on the ground, bleeding and sobbing, and prayed to Ra. She prayed until the sun came up, and slid across the sky, and went down again. She prayed for rescue, for a sign, for an answer. None came. She let the exhaustion take her.

When she woke, the blood was gone; the pain was still there, but it was less.
“Nell,” said a small voice, startling her. A young girl, no older than 8 or 9, stood at the entrance of her tent. “I wrapped you and cleaned you, Missie. Like I done for all my brothers and sisters. I’m Nell,” she repeated. “What’s your name?”
“Cymbrean,” she said, and the girl laughed. “That’s a mouthful, innit? Howbout Bree, instead?”

The two became fast friends. Bree took on the new nickname, and they made the last few hours of the journey to Korvosa together. Nell explained that it was her job to wait for travelers on the road into Korvosa, and report back to Mr Lamm. Over the next few years, Bree learned what type of operation Gaedren Lamm ran; she stayed close friends with Nell, sneaking her food and extra bits of coin every day she could. Bree herself took up residence at the Academy, pouring herself back into her studies, still determined to find her way to becoming a Cleric. She never prayed to Ra again.

5 years after coming to Korvosa, Bree received a scribbled letter. It read “Lamm is done with me. Place where we met.” Panicked, Bree rode east out of town, making her way to the old campsite as fast as she could. She saw the blood from a mile off; Nell lay lifeless and mangled on the bank of the river. Screaming and sobbing, Bree fell to her knees and, for the first time in 5 years, she prayed.

But not to Ra. Bree cried out to the Abyss, to the heavens, to anyone who could be bothered to give a damn. Filled with rage at the atrocities of this world, she called on anyone listening for the power to protect those who needed it, and annihilate those who deserved it. This time, she got her answer. Light enveloped her; light full of healing warmth and raging fire, full of life and death, full of chaos.
“Saranrae answers your call,” a voice spoke from within the light.
“I won’t beg, and I won’t bow,” Bree warned through gritted teeth, the broken spikes of bone where her wings had been aching with the memory of her last encounter with a God.
“No one here asks you to bow,” she said. “Only to heal the broken and protect the innocent. And those who would harm them, bring them to a fiery end.”
“That, I can do” Bree said, smiling as the light flew into her and flowed through her veins.

She stood, Awakened, and walked back toward Korvosa with a single word on her lips: 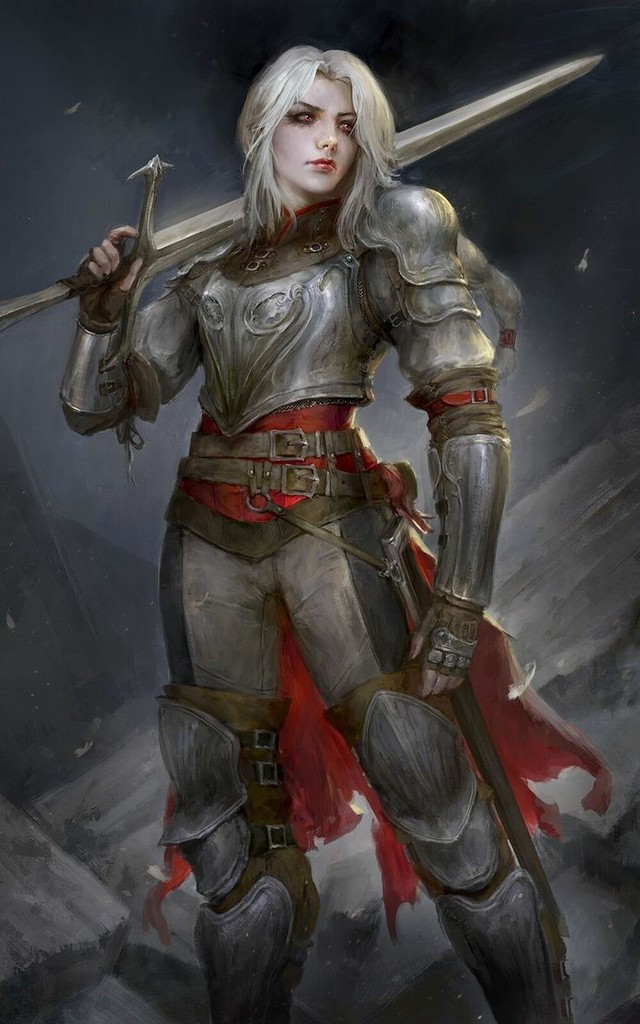